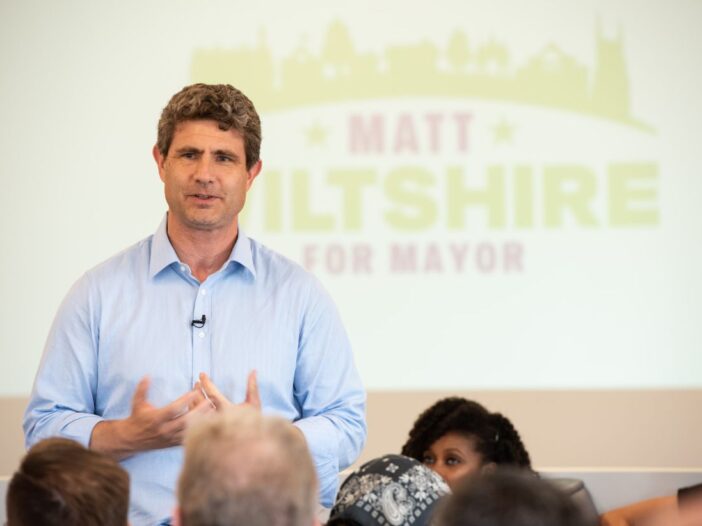 NASHVILLE, TN–Local affordable housing leader, Matt Wiltshire, has filed paperwork and is officially entering the campaign for Mayor of Nashville this morning.

“We need a long-term vision to tackle our biggest challenges, and we need city services like trash pickup and pothole repair to work right now,” Wiltshire said. “I have heard from people across the county on their concerns about the cost of living, the strains of growth on our infrastructure and transit, education, and public safety.

Wiltshire has spent the last three years working on affordable housing at the Metropolitan Development and Housing Agency (MDHA), Nashville’s public housing authority. He previously served as the Director of the Mayor’s Office of Economic and Community Development for eight years under three mayors.

Wiltshire noted that since leaving the housing authority at the end of April he has been on a listening tour featuring over one hundred meetings across Nashville to hear from residents about the issues and opportunities facing the city.

“I deeply understand the challenges that we are facing as a city. I grew up here in Nashville and attended Metro Nashville Public Schools. My wife and I have dropped off our six kids at some of those same schools. I have worked for the past few years on building more affordable housing in Nashville through public-private partnerships and on transforming areas of concentrated poverty into thriving mixed-income neighborhoods that improve the safety and quality of life for residents and neighbors.

“We must keep the character of this amazing place and not transform into a city we don’t recognize.”

To accomplish this, Wiltshire proposes that the city should be investing in neighborhoods across the county. Each community is different and may need different things to thrive. The first step is to listen to residents to hear what they want to have in their neighborhood. Then the city should work to attract the key resources.

“I love my hometown. I was born here, and I chose to raise my family here. I believe that if we focus on the long term and align the efforts of the public, private and nonprofit sectors, we can meet our city’s challenges and that Nashville’s best days are ahead of us.”

Wiltshire noted he will have a more formal public campaign kickoff in the weeks and months ahead.

Matt Wiltshire was born and raised in Nashville and attended public schools growing up here. He gave up a successful private sector career to work on economic and community development for Mayor Karl Dean after the great recession when the unemployment rate was over 8%. During his tenure, Nashville added 42,000 jobs, the city developed incentives for small businesses investing in diverse neighborhoods, and the unemployment rate dropped to 2%, which was the lowest of any metropolitan area in the country. After a tenure that resulted in local small businesses expanding and national companies relocating to Nashville, Wiltshire saw housing attainability as an increasing issue and volunteered to move to the city’s housing authority to develop more affordable housing through public-private partnerships.  Amazon recently announced that it will invest more than $7 million as a part of the latest mixed-income redevelopment project at Cayce Homes, one of the last projects Wiltshire handled as the Chief Strategy Officer at MDHA.